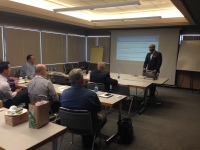 Here are some other highlights:

“The greatest source of frustration in California is the elections and politicians,” says IWLA president & CEO Steve DeHaan. “The state implements so many new regulations that it is impossible for business owners to keep up with them.”

Though business leaders try their best to stay compliant with laws and regulations, eventually, according to DeHaan, it makes more sense for them to take their operations elsewhere. “It’s a vicious cycle because businesses are leaving, the population has dropped, the economy slows down, and regulators and politicians are coming up with new taxes in order to make up for the slow economy,” he says.

One of the largest concerns in California rests in a hidden gas tax under California’s “cap and trade program.” IWLA has joined other transportation and business leaders in the Tank the Tax grassroots effort to increase awareness of this tax to consumers, who will also be affected.

The tax, which was approved by the California Air Resources Board (CARB), is expected to hike up gas by at least 12 cents by implementation in January 2015. The move is designed to reduce greenhouse gases by moving fuels to a state-run carbon market where providers buy “carbon allowances.” This carbon-market is also open to third-party traders, which opens the door for price increases of these allowances.

According to a statement Steve DeHaan made to the Long Beach Patch: “There is no way businesses can be prepared for the cost of fuel when fuel prices are determined by an unpredictable market. I don’t want to raise prices on the goods we distribute from our warehouses, but I am going to have to. There is no way any company can swallow the burden a new high tax.”

The next step for IWLA is to continue to raise awareness in member companies. “This issue affects our employees as well; so they need to understand that a drastic increase in gas is coming,” DeHaan says.