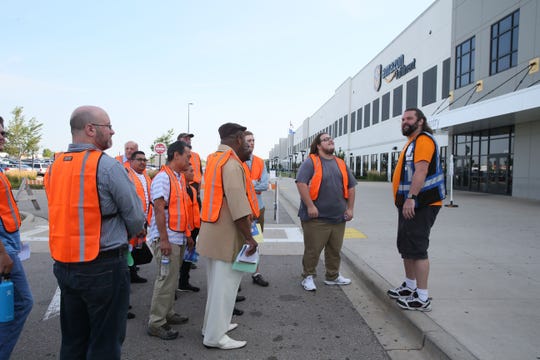 KENOSHA – Anyone driving Interstate 94 past the big Amazon and Uline distribution centers can see that warehousing has become a key element in Kenosha County’s economy.

What isn’t so obvious is this: The growth in warehousing jobs here isn’t just dramatic locally; it stands out on a national scale. And it is reshaping the Kenosha economy.

In 2014, with the Amazon distribution center planned but not yet open and packaging materials distributor Uline still growing, Kenosha County had 943 jobs in the industry sector formally called “warehousing and storage.”

During those three years, Kenosha County accounted for four of every five new warehousing jobs across the entire state.

And among 625 U.S. counties for which the federal government publishes warehousing employment numbers, only seven outstripped Kenosha’s growth, a Milwaukee Journal Sentinel analysis of data from the Quarterly Census of Employment and Wages shows.

The census, published by the U.S. Bureau of Labor Statistics, covers nearly all jobs in the country and, unlike most employment data sets, is an actual count rather than a survey. It includes part-time and seasonal workers, but information from the warehousing companies themselves suggests that the vast majority of their Kenosha County employees are full time.

The job gains in warehousing far exceeded those in any other industry group in the county. They accounted for 50 percent of its total employment growth over the 2014-’17 period, and now are approaching the total for the entire manufacturing sector.

Viewed from a longer perspective, the transformation is even more striking.

In 1999, Kenosha County had just 96 jobs in warehousing and storage, and 12,257 in manufacturing. By 2017, the number of warehousing-sector jobs had increased more than 50-fold. Manufacturing employment, meanwhile, had shrunk by 40 percent – nearly double the statewide decline of 22 percent.

Over roughly the last 10 years, about 12.5 million square feet of warehouse space have opened or are under construction in Kenosha County, Todd Battle, president of the Kenosha Area Business Alliance, estimates.

That doesn’t include another million square feet for which site preparation has begun, or other projects in the proposal stage, Battle said by email.

With the warehousing surge, Kenosha County led the state by a wide margin in the rate of total private-sector job growth.

The 23 percent gain from 2014 to 2017 was more than twice that of any other county, and six times the statewide increase. Even in raw numbers, Kenosha’s increase bested almost every county, including Milwaukee with its far larger employment base.

That’s a couple dollars better than jobs in call centers or retail stores, for example, but about $4 an hour below manufacturing or trucking.

Average hourly pay for warehousing isn’t available by county. But Amazon, which has 2,500 full-time jobs in Kenosha, only recently raised its minimum wage to $15 an hour. Over the last three years, average hourly pay figures posted on Indeed.com range from $11.50 for stocking associates and $11.51 for material handlers to $13.77 for warehouse workers.

Uline appears to pay significantly more. Its minimum is $17.50, while average rates posted on Indeed.com for material handlers ($17.50) and warehouse workers ($20.48) are higher than Amazon, too.

“They (Uline) will tell you it’s much harder to get a job with them than with Amazon,” said Thomas Groleau, a management professor at Carthage College. “They’re actually proud of that. They pay you better and they say we have better working conditions, we have room for advancement, and it’s harder to get a job out here.”

In an announcement last July, Amazon said average hourly pay for its full-time Wisconsin employees, including cash, stock and incentive bonuses, was more than $14.50.

Groleau said that while warehousing doesn’t pay as well as manufacturing, the growing demand for warehouse workers in Kenosha County has put pressure on lower-wage sectors such as fast food to raise pay.

With the rise of digital commerce, warehousing employment has soared nationwide. The sector added 277,000 jobs from 2014 to 2017 – fifth highest among 91 industry groups.

DeHaan, of the International Warehouse Logistics Association, said the group’s members “are expanding as fast as they can” and, for the most part, are near the edges of major metropolitan areas.

Such locations – like Kenosha with its proximity to Chicago – offer relatively low land and development costs while still allowing goods to be shipped easily to the big cities where customers are concentrated, DeHaan said.

“Amazon’s goal is not two days, it’s one to two hours, and if you’re going to provide that level of service you have to be in the proximity (to the major markets). You just have no choice.”

He said that appears to be happening in far southeastern Wisconsin and likely played a role in the decision by Foxconn Technology Group to locate there.

“I know for a fact, having worked with the Foxconn folks, that logistics was critical and will be increasingly important,” Fisher said. “They’re going to need increasing intermodal and rail services, they’re going to need air services. … They’ve got a reason to be there beyond just the $4 billion (in public subsidies).”

Given the evolving nature of the economy and the dynamics unleashed by the warehousing cluster already in place, Fisher expects to see continued growth in the sector in Kenosha County.

“I think the only problem we’re going to have, and it’s a good one, is feeding them with an employee base,” he said.

Given the increasing strength of internet-based commerce, Kenosha County probably can count on the warehousing jobs for a while, Groleau said.

“So there is at least a foundation that the economy here won’t collapse,” he said, “but it’s not a very lucrative foundation.”