Amazon’s one-million-square-foot distribution center in Baltimore is a massive fulfillment machine. Stand at one end of the warehouse, and its titanium-white scaffolding and seemingly endless conveyor belts disappear at a vanishing point that is, somehow, within the building. The machine is a dazzling combination of chutes, ladders, rollers and 11 miles’ worth of conveyor belts. Customers’ orders move from shelving into bins and from bins into boxes as they travel via the machine straight into delivery vans, passing by stationary workers at various points along the way. Humans are rarely required to move around here. It’s much faster, and cheaper, to have stuff brought to them.

This is where robots come in. Resembling oversize Roombas topped with Ikea shelving, these Kiva robots can carry up to 750 pounds of goods in their 40-odd cubbies. After a customer places an order, a robot carrying the desired item scoots over to a worker, who reads on a screen what item to pick and what cubby it’s located in, scans a bar code and places the item in a bright-yellow bin that travels by conveyor belt to a packing station. AI suggests an appropriate box size; a worker places the item in the box, which a robot tapes shut and, after applying a shipping label, sends on its way. Humans are needed mostly for grasping and placing, tasks that robots haven’t mastered yet. 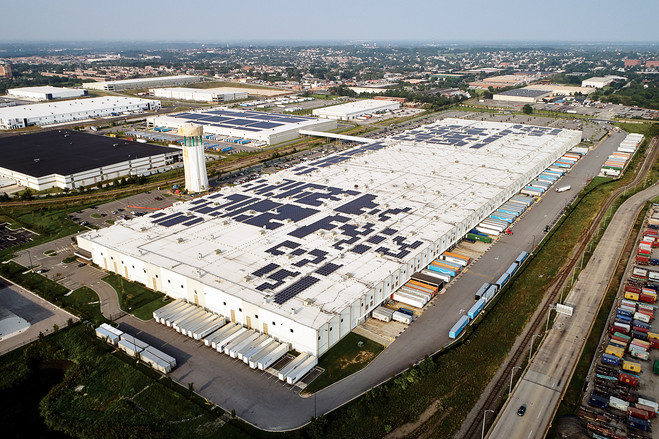 Amazon’s one-million-square-foot fulfillment center in Baltimore is one of the retail giant’s 140 warehouses in the U.S. PHOTO: SPENCER LOWELL FOR THE WALL STREET JOURNAL

Amazon’s robots signal a sea change in how the things we buy will be aggregated, stored and delivered. The company requires one minute of human labor to get a package onto a truck, but that number is headed to zero. Autonomous warehouses will merge with autonomous manufacturing and delivery to form a fully automated supply chain.

We are in the early days of what might be called the “physical cloud,” an e-commerce ecosystem that functions like the internet itself. Netflix caches the movies you stream at a data center physically close to you; Amazon is building warehouse after warehouse to store goods closer to consumers. And the storage systems at those warehouses are looking more like the data-storage systems in the cloud. Instead of storing similar items in the same place—a helpful practice when humans were fetching the goods—Amazon’s warehouses store multiples of the same item at random locations, known only to the robots. Trying to find an Instapot at one of Amazon’s warehouses would be like trying to find where in the cloud one of your emails is stored. Of course, you don’t have to. You just tap your screen and the email appears. No humans are involved.

The same will someday be true of the things we buy.

Delivery is about to change drastically too. Amazon, Google, Uber and many startups are working on autonomous delivery drones that will one day connect us to the physical cloud. Remember the days before ride-sharing apps, when we hailed cabs with our hands or a phone call? Uber and Lyft made it easier. Now imagine summoning power tools or appliances delivered by drones. We may someday store objects we own in the physical cloud the same we way store photos in the digital one.

Thanks to retail’s low margins and the high cost of robots, warehousing has been slow to embrace automation, lagging behind industries like farming and car manufacturing. That changed when Kiva Systems, founded in 2003 in Reading, Mass., developed robots that could bring items to workers. At one point, Kiva’s clients included Gap, Saks Fifth Avenue and Staples. Then in 2012, Amazon bought Kiva for $775 million, took Kiva’s robots off the market and made them the backbone of its distribution centers. According to Deutsche Bank, acquiring Kiva reduced Amazon’s fulfillment costs by 20%, and it blew an enormous hole in the plans of its competitors. Because of patents and the difficulty of recreating Kiva’s deep well of expertise, new robotics companies weren’t able to offer comparable systems until the past couple of years.

Some of those retailers are trying to eliminate jobs, but Amazon is doing the opposite—for now. The company employs 575,000 people, up from 340,000 a year ago. Many of them work in fulfillment centers, performing tasks that robots haven’t mastered but could master soon. 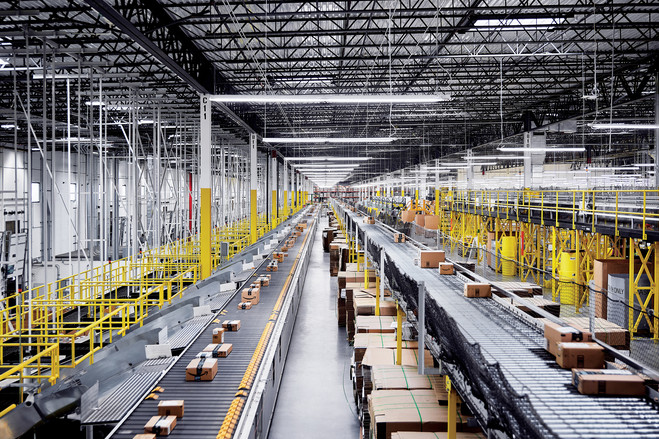 This Amazon distribution center in Baltimore can fulfill a million orders in a day. It may not need humans for long. PHOTO: SPENCER LOWELL FOR THE WALL STREET JOURNAL

Amazon is coy about its long-term plans. Tye Brady, the chief technologist for Amazon Robotics, says only that the company is always seeking to make its employees more efficient. Other retailers are more blunt. Richard Liu, the CEO and chairman of JD.com, a leading e-commerce company in China that relies heavily on automation, has said his goal is a 100% robot workforce.

A fully automated warehouse is just the beginning. Amazon and Walmart have patented blimplike warehouses that will float 1,000 feet in the air, armed with drones ready to deliver toothpaste and toilet paper to your doorstep as if they were files. Welcome to the physical cloud.

Before we get there, robots need to be able to perform every warehouse task on their own. While no other retailer comes close to Amazon in terms of scale, Ocado , an online-only grocer in England, has more sophisticated automation by far. In a brightly lighted warehouse an hour north of London, a swarm of Ocado’s R2-D2-size robots scurry about on an elevated grid of squares, crisscrossing and coming close to crashing into one another without ever doing so. 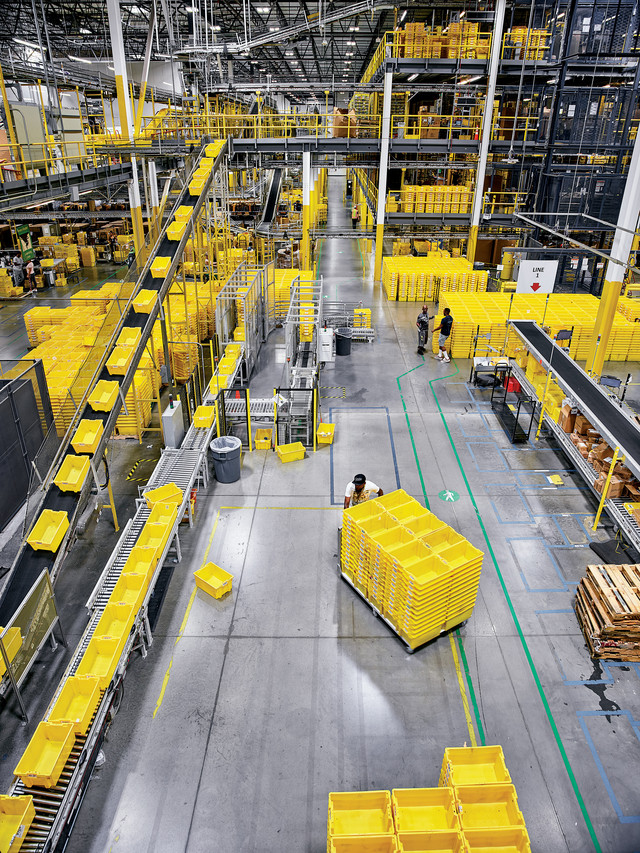 Beneath the grid are the groceries, stacked in bins 18 layers deep. After a customer places an order for, say, a gallon of milk, an Ocado robot comes to the appropriate square and reaches its arms downward to grab a bin containing milk. Then the robot sucks the bin into its belly and carries it to a conveyor belt, which conveys the milk to workers, who have the dexterity to grab the individual carton and pack it into a bag. Although neither Amazon nor Ocado has robots that can pack items efficiently, Ocado’s robots can autonomously move items from storage onto conveyor belts.

More impressive than the robots is the software behind them. Ocado’s system requires an AI of unholy complexity. The AI is trying to optimize every aspect of Ocado’s fulfillment: where to store its tens of thousands of items, which of those should be packed first and into which bags, which items should go on which trucks, which delivery route to take so that ice cream doesn’t melt on the way. The optimal solutions for different factors don’t always agree with one another: The fastest way to load a truck may not be the most efficient use of its space. As a result, adding just one more variable to the system increases the difficulty exponentially. And Ocado is optimizing for millions of variables.

Solving these problems strains the resources of Ocado’s cloud-computing partner, Google, which is one reason Google’s engineers like working with this system, says Paul Clarke, Ocado’s chief technology officer. It’s a never-ending challenge: As soon as Google’s engineers get closer to a solution, Ocado can add another variable. And with each new variable optimized, Ocado becomes more efficient and widens its advantage over its competitors—and moves one step closer to creating the AI that will be required to run the entire physical cloud.

Ocado’s system takes a fundamentally human and Byzantine process—receiving shipments from food manufacturers, stocking and restocking a warehouse, assembling customers’ orders and placing them into baskets, scanning them and packing them into bags—and automates it to an unprecedented degree.

It took 18 years and many iterations to create this system, which has enabled Ocado to quickly deliver groceries to a customer’s front door for about the same price as they would cost at the store.

Selling groceries may be just the beginning for Ocado. The company also has patents related to using its system in indoor, vertical-farming operations. One day, food might be grown in the same facility that stores and delivers it. Companies like AeroFarms are growing greens in giant warehouses on the outskirts of major cities. In the future, a robotic hand could pluck a pint of strawberries from the bin they were grown in and then pass them to a delivery drone. Just as Amazon uprooted retail middlemen and made it possible for Chinese companies to sell directly to American consumers, warehousing and manufacturing—and farming—could also merge. It isn’t farm to table, but it might be called factory to door.

Ocado is already thinking bigger. According to Clarke, the company is exploring how to use a jumbo version of its robots to handle shipping containers. Because loading cargo onto trucks is so difficult, ports suffer from bottlenecks. Like increasing bandwidth to expand the capabilities of the internet, enlarging Ocado’s robots could make it possible for them to move on top of a grid of shipping containers and load them onto delivery vehicles. 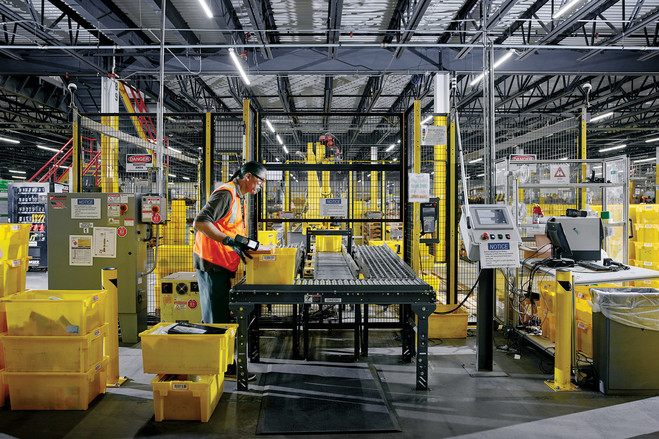 Workers might lose out when robots like the one pictured below become more dexterous. PHOTO: SPENCER LOWELL FOR THE WALL STREET JOURNAL 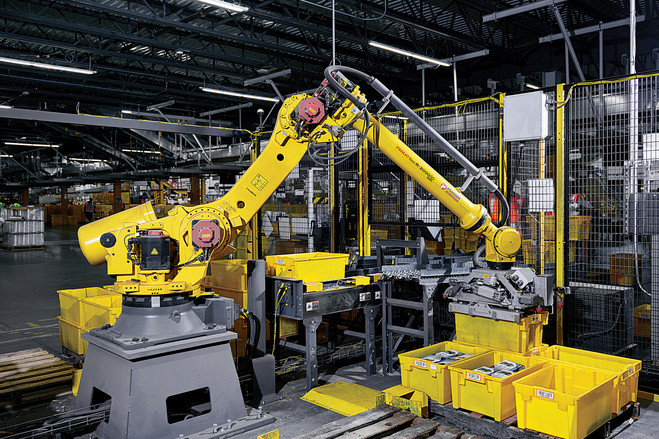 After warehouses, delivery vehicles are the next target for automation. Amazon and Walmart are working on how to get packages from a self-driving van to you, whether that’s by deploying an even smaller autonomous vehicle or by delivering to a locker in your neighborhood.

When you remove the need for a human driver—and a steering wheel, an air bag and a seat belt—a delivery vehicle can take almost any shape. Mercedes-Benz’s concept for modular transportation is an autonomous electric “skateboard” chassis that can be the undercarriage for a passenger van, a cargo truck or a mobile home. During the day, the chassis could be attached to the body of a bus and used to transport passengers, and then at night it could detach so it could charge while stacked in a garage. Or it could be used to haul a whole shipping container in one direction and then swap out one body for another to carry passengers in the opposite direction on its return trip.

Instead of standard-size vans, fleets of small delivery “pods” could pick up packages from central depots and deliver them to your doorstep, using AI infrastructure similar to what’s currently being used in warehouses.

Although drone deliveries have already begun in rural China, Iceland and remote parts of Africa, landing cargo-carrying drones in densely populated cities could be a hazard and is against Federal Aviation Administration regulations. As a result, wheeled delivery systems are much more likely in the U.S. for the near future. But before long, the skies could become extensions of the physical cloud, connecting us the way our mobile phones connect us to cloud computing. Imagine a drone dropping out of the sky to deliver you an iced coffee on your walk to work. In fact, IBM already has a patent for that.

Write to Christopher Mims at christopher.mims@wsj.com