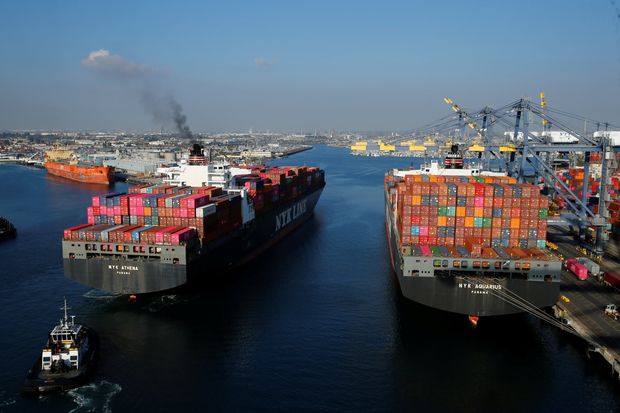 LOS ANGELES—A steady wave of imports into Southern California’s ports, driven by a robust U.S. economy and companies trying to get goods moving ahead of potential tariffs, has the region’s warehouses and shipping terminals overstuffed and distribution networks jammed.

U.S. businesses have been pulling shipments forward ahead of expected tariff increases and China’s Lunar New Year holiday, when the nation’s factories shut down for several weeks. That stacked-up inventory is straining logistics capacity around the neighboring ports of Los Angeles and Long Beach, which together comprise the biggest U.S. trans-Pacific gateway.

Imports surged after U.S. trade officials announced a plan in September to raise tariffs on $200 billion in Chinese imports by 25% on Jan. 1. During the last three months of 2018, import volume at the ports of Los Angeles and Long Beach was up 9% over the same period a year earlier.

As goods poured in, warehouse space in one of the most crowded markets in the U.S. filled up. Industrial availability in Los Angeles and the nearby Inland Empire region was 4.6% and 6.3%, respectively, in the fourth quarter, according to real-estate brokerage CBRE GroupInc. Overall U.S. availability fell to 7%, its lowest point since 2000.

The cargo keeps coming. In January, estimated seaborne imports to the U.S. rose 4.1% year-over-year to 1.83 million 20-foot equivalent units, a standard measure for container cargo, according to a report last week from the National Retail Federation and Hackett Associates.

A temporary cease-fire in U.S.-China trade negotiations pushed the threatened levy increases to March 1, providing more incentive to pull goods forward. Mr. Patterson said he now has more people on staff than he did during the holidays. The company recently moved into a larger warehouse facility, which has also quickly filled up. “For January to have been this packed is kind of odd,” he said.

An apparent decline in December U.S. retail sales may be contributing to the capacity crunch, though some analysts have questioned whether the drop was as steep as a recent government report indicated.

All that inventory is driving up supply-chain costs. Congestion is slowing the movement of cargo to and from the ports, with some shippers racking up hefty fines for leaving containers too long on the docks or not returning them in time. Those costs have reached hundreds of thousands of dollars for some large-scale shippers over the past six to 12 months, said Jess Dankert, vice president of supply chain for the Retail Industry Leaders Association.

“The longer this goes on, the more you’ll see ripple effects throughout the supply chain,” Ms. Dankert said. “It very quickly becomes a pretty expensive proposition.”

Holding all those goods can also hurt companies’ bottom lines. Lora Cecere, an analyst with research firm Supply Chain Insights, said the cost to carry so much extra inventory could reach millions of dollars—particularly if companies misjudged what they are going to need and end up having to reduce prices to get rid of it later.

Jonathan Gold, NRF’s head of supply chain and customs policy, said the uncertainty around trade has retailers in a bind. “Folks for so long tried to take time out of the supply chain,” he said.

Corrections & Amplifications
In January, estimated seaborne imports to the U.S. rose 4.1% year-over-year to 1.83 million 20-foot-equivalent units, according to the National Retail Federation and Hackett Associates. A previous version of this article incorrectly said they rose to an estimated 1.97 million 20-foot equivalent units. (Feb. 17)

“Now you’re trying to keep more inventory on hand to mitigate risks from tariffs—it flies in the face of all those changes.”